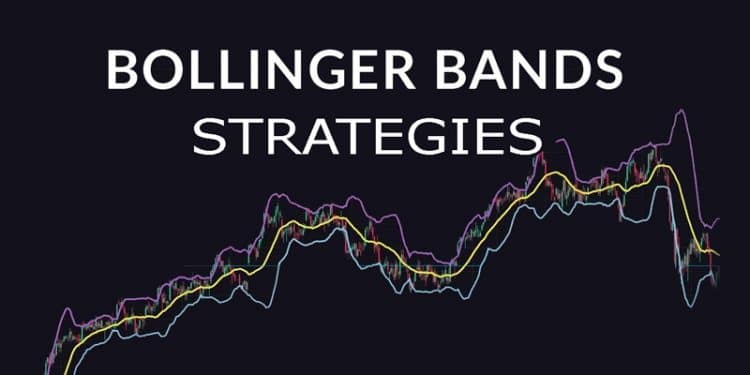 Several Forex merchants regard Bollinger Bands as one of the most potent indicators as they can use them to assess the nature of a trend and identify decent entry points. Some players in the Forex market think that in order to make consistent gains, more indicators are needed, but this is far from the truth. Sometimes the simplest indicators can work wonders for you, so let us look at Bollinger Bands in detail.

What are Bollinger Bands?

Bollinger Bands is an instrument for technical analysis that uses standard deviation (SD) to demarcate the resistance and support levels on a trading chart. It was created by John Bollinger who wanted to create an indicator that could point out comparable lows and highs in a market that’s moving dynamically. It consists of 3 lines:

Let us look at how the three different parts of Bollinger Bands (BB) are calculated:

The different Bollinger Band trading strategies are as follows:

When the Forex market shows large shifts in price and time in the direction of the trend, an impulse move is said to have taken place. On the other hand, a corrective move occurs when smaller moves take place in the market contrary to the general trend direction. These can be measured accurately with the help of Bollinger Bands.

Take, for example, the bullish EUR/USD chart shown above. When we use BB along with it, the support scale is depicted by the lower BB. Forex players see it as a buying opportunity when the price reaches the lower BB. You may also use this scheme for a bearish market.

You need to set the take profit limit from the two bands based on the nature of the trend. For this purpose, the take profit region can be represented by the upper band.

This trading scheme involves identifying the consolidation areas first. You can point them out when the bands start to shrink. After identifying this system, you can use horizontal lines to demarcate the range’s peaks and troughs.

From the figure above, it is apparent that upon the contraction of the bands, a sideways movement of the price action takes place. You should prepare your set up at this point, waiting for the expansion of the bands and the breakout to take place. Following the breakout, you can enter a long trade as the new session begins.

The above figure represents short trading set up using BB. After identifying the squeeze area, the range’s peaks and troughs are to be plotted. After this, a short entry can be carried out once the downside breakout takes place.

As is apparent, Bollinger Bands are versatile indicators that provide you with vital information related to the trend. You can judge how strong a price movement is by using more than one band. They are long-term indicators that are easy to use, which is why most traders favor them.

Never Have A Margin Call In Forex Again With These Tips